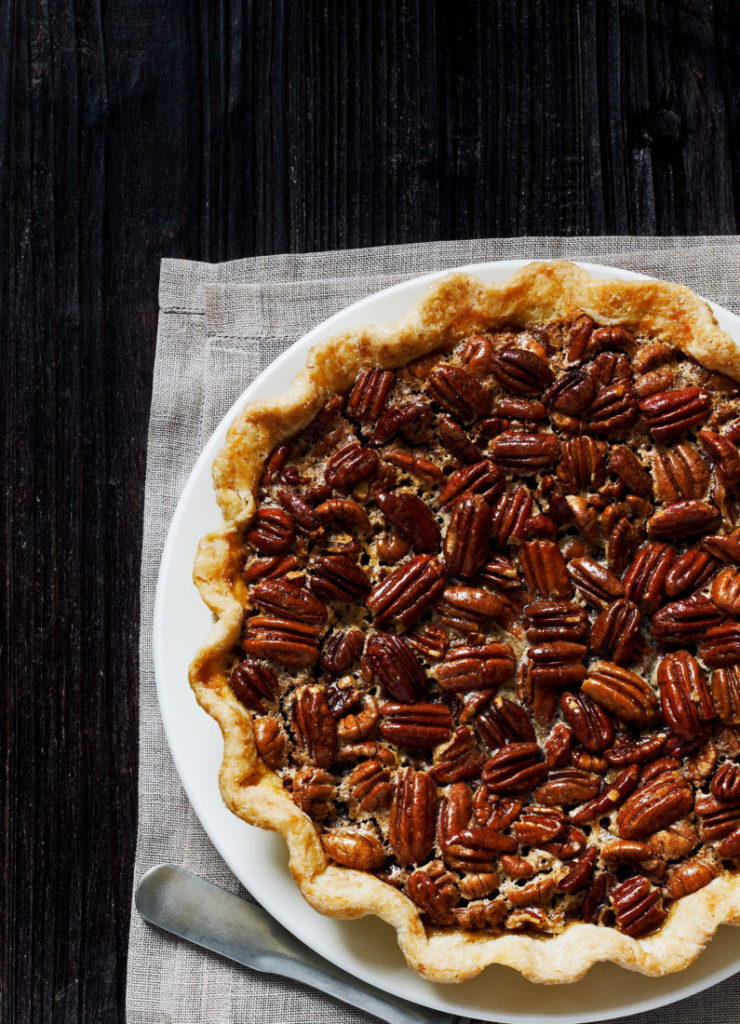 ANATOMY OF A CLASSIC
Bourbon Pecan Pie
It’s hard to beat a fresh pecan pie, unless you add a little bourbon
by FRANCINE MAROUKIAN

The only tree nut indigenous to the South, the pecan has been used in the region’s cooking since the earliest colonists met Native Americans. But the rise of pecan pie—sometimes called Karo pie—came centuries later, commonly traced to a product-based recipe printed on jars of Karo corn syrup, circa 1930. 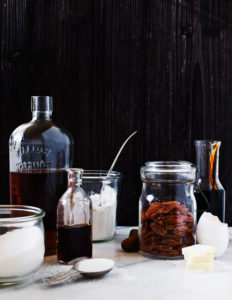 “That doesn’t surprise me,” says Hilary White, chef and co-owner of the Hil in Serenbe, a 1,000-acre sustainable community located in Georgia’s Chattahoochee Hill Country. “There was a day when family favorites were a mix of recipes clipped from the Sunday newspaper and Ladies Auxiliary books. Others came straight off the flour sack.”

While pecans grow throughout the South, Georgia has been the nation’s largest producer since the late 1800s. The state’s growers even donated enough pecan trees to create wood handles for more than ten thousand torches carried during the 1996 Olympics in Atlanta. With peak harvesting months October to December, it makes sense that pecan pie became a traditional Southern holiday dessert, and the rich, nutty flavor matches the aromatic spices used in savory Thanksgiving recipes. “Every year my father’s parents would drive from Florida to Ohio, where my family lived at the time, stopping in Georgia to buy pecans,” White says. “I remember it was dark outside and we’d sit in the eat-in kitchen, picking them. My grandfather would use the nutcracker, and my grandmother and I would use the nut picks. It was delicate work because you didn’t want to crush the pecans but keep them perfect halves for the pie.” 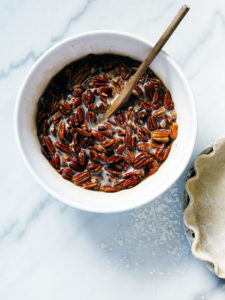 White’s maternal grandmother contributed the piecrust, and like most inherited family recipes, it has a few “miracle” ingredients. The flaky tenderness comes from fresh white lard, testament to the recipe’s age. And the acidity in the vinegar enhances the workability of the dough, keeping it so pliable you don’t even have to rest it.

“Pie making is sort of a lost art,” White says, “and this is a good old recipe.” Though she did add one other miracle ingredient to her grandparents’ version: bourbon. “It has the same flavor nuances of the dark corn syrup and makes the pie even more Southern.”

1. For the pie crust: Place flour and salt in bowl, and cut in lard until mixture resembles small peas. In a Pyrex measuring cup, combine vinegar and egg, and add water to make ¹⁄³ cup liquid. Slowly add liquid to the flour mixture, forming dough. Do not overwork. Remove from bowl, halve, and pat into disks. If not using immediately, cover in plastic wrap and chill.

2. Roll out one dough disk and fit in 9-inch pie pan, crimping edges.

5. Bake in preheated oven for 1 hour and 15 minutes (a toothpick inserted in center should come out relatively clean). Remove from oven and place on cooling rack, allowing pie to rest for 2 to 3 hours to set.

Meet the Chef: Hilary White and find the full recipe on Garden & Gun

Kicked off the birthday celebrations for my oldest

Special thanks to our friends @new_vernon_fire_dep

Hope you all had a wonderful Thanksgiving spent wi

From my Family to yours, Happy Thanksgiving.​​

The mission of Saint James School is to develop Ch

It’s beginning to look a lot like the Holidays!

Whether you’re practicing your menu for Thanksgi